These awards honour two French-speaking researchers for the scientific value and innovation of their work. This work must be under publication or have been published during the course of the year. Each winner receives a prize of 3,820 Euros. The awards are announced during the plenary session of the Osteoarthritis Congress of the French Society of Rheumatology which provides the opportunity for a friendly get-together between jury members and candidates on the EXPANSCIENCE stand. The awards are given based on the dossiers by two separate and independent juries:

The ARTHROSIS AWARDS of the Laboratoires EXPANSCIENCE are open to all hospital doctors of a French-speaking service (heads of services, hospital practitioners, heads of clinics, interns, ...) the applications are to be withdrawn from the agency NUKLEUS - nukleus@nukleus.fr - and are to be submitted in September. 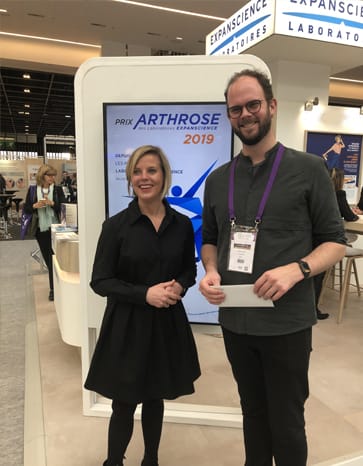 The prize for Clinical Research was awarded to Dr Augustin Latourte  ( Hôpital Lariboisière - Paris) : for his work : « Chondrocalcinocis of the knee and the risk for osteoarthritis progression : data from the KHOALA cohort ».

And the prize for Basic Research was awarded Pr Cécile Lambert (CHU Sart-Tilman -Liège) for : « Type II collagen peptide Coll2-1 is an actor of synovitis ».

for each unit increase in Body Mass Index.*